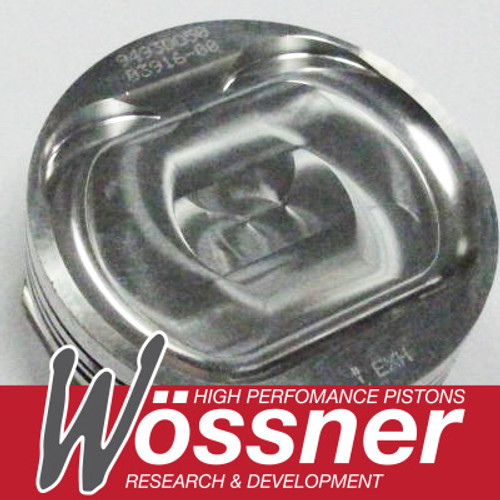 Porsches most power 4 cylinder front engines cars were the 944 S2 and 968, both of which had large bore 3 liter engines. Porsche listed the S2 at 10.9:1 CR and the 968 at 11.0:1. In our experience building race engines for these cars, we have usually see the actual compression of these engines more near the 10.5:1 range. So when we worked with Wossner to design these pistons for the 944S2 and 968, we decreased the dish volume of the piston by approximately 2.0cc to help get the engine CR up the target of 10.9:1/11:1 . As the 944 engine blocks were made out of Alusil, special consideration had to be given to a skirt coating which would hold up to the special requirements particular to Alusil. The factory 944 and 968 piston skirts had a Ferrostan coating which applied a very thin protection layer to the skirts of the pistons, but this process was banned years ago due to environmental concerns. So Wossner works with Dow Corning which produces a coating designed specifically for the special requirements of an AL piston running in Alusil blocks however the coating does not exclude other lining materials. A block that has been repaired with a cast iron liner or one that has been Nikasiled can also run these pistons. Likewise , the ring pack that is provided can run on any of these surfaces.